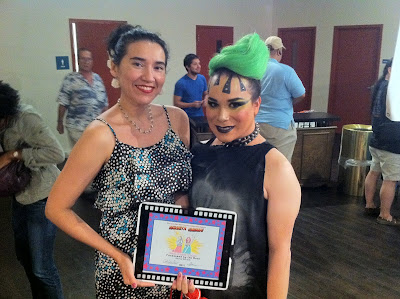 The distinguished panel of judges included native Houstonian Alfred Cervantes, Deputy Director of the Houston Film Commission. Another judge was producer and director, Mary Lampe, Executive Director of Southwest Alternate Media Project. Lampe also serves on various grant panels around Texas. Another judge was Dr. Tish Stringer, anthropologist and media maker, film lecturer and Film Program Manager at Rice University Department of Visual and Dramatic Arts is also the Film and Video Tech. Executive Director of Lawndale Art Center, Christine Jelson West was also on the judging panel. West, also a native Houstonian has a long history of working with the Orange Show Center of Visionary Art; Texas Visual Art Online and like Lampe, West serves on various art boards around the state.  Academic and independent media consultant, Margarita de la Vega-Hurtado, was also on the panel. Vega-Hurtado spent several years as the Executive Director of Flaherty International Film Seminars. Judges said "it moved well." One said "during the screening, the judges couldn't take their eyes off of it."

It was nice to have MaxXandaux (right above) on site to share the joy of my winning moment.

Spring is just around the corner. I thought I'd share more shows from Fashion Houston Day 2, which was full of wonderful surprises, & great people. Here's a look! Enjoiah.
Read more

This is a story of  one man's mission to give a famous music artist an original painting of the star . But it's not just any painting and his subject is not just any star. "4 THE QUEEN 'TRAP SELENA'" is an original painting by Atlanta, Georgia artist  @lucidmeegz , of  Grammy winning performer Cardi B. The image is a stark portrayal of an amalgamation happening in music today, by one of the world's most popular music artists. Cardi B. From what I've come to understand in just a few minutes of research, Cardi B. is a unique blend of what resonates in the minds of Selena fans everywhere who remember her final performance at the Houston Livestock Show and Rodeo. An event Texans can't forget. ~ AND. Combined with ... Impact of the outspoken, sexy commixture of music from the self-proclaimed " Trap Selena " - A flavor only Cardi B, a Bronx, N.Y. native, brings, that seems to increasingly garner support from artists of the domineering
Read more