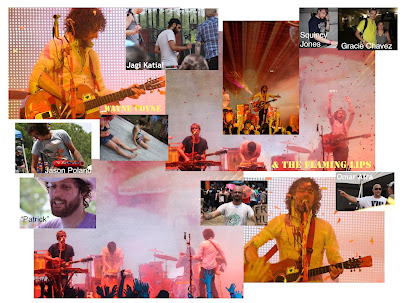 Summer Fest 2010
Houston has embarked on something new thanks to the talent of Houston and people who stand behind it. Summer Fest means hope for those who miss the spirit of the original Westheimer Arts Festival. It’s a stretch to compare it to Woodstock, but the parallels of painted people and mud dancing around getting high, WITH permission still stand. This along local budding talent tells me, as a native Heightstonian, that Summer Fest has the potential to be better each year. Supporters like Wayne Coyne, lead singer of headliner, The Flaming Lips and the thousands in attendance applauded his hope for the future of Summer Fest. “I hope Summer Fest goes on for 100 years,” Coyne said during their set. The Flaming Lips were nothing short of spectacular. They brought all their toys including the slide, bubble for Wayne to surf the crowd, the gong, the hands, his strobe necklace, the camera mic, and of course the bear (who’s also half man), who didn’t mind giving Wayne a piggyback ride onstage.


Houston talent entertained Houston for 2 days straight on 5 stages in Eleanor Tinsley Park June 5 & 6th. The people behind the scenes who have made this happen for the second year in a row and hopefully 100 years to come are Omar Afra and Jagi Katial. Both were literally behind the scenes. They were moving cables & mics to accommodate main stage acts.
Patrick with the cowboy hat pull out the hose and begin dousing people with water as they slathered on paint. One by one, people started barreling down the slip-n-slide hill of color. An ambulance showed up as a precaution, but I heard more about people passing out than actual injuries. Then it rained. Hard!
Thanks to the courtesy of nervioshop.com’s Jason Poland and his crew, I snagged a spot under a tent with my precious cargo. I was there when a huge gust of wind knocked down a lego tower that took 2 days for Poland to complete. Some helped pick up the pieces. Suddenly, a huge crowd of people waiting to slide, all decided to go down together. THAT was an amazing moment! No word on any injuries. Then I went down the hill & by that time, many were still sliding in the mud... not all by choice.
Then came a glimpse into the idea of “no water” which I find to be reoccurring more lately. Many washed their faces and rinsed their sunglasses in muddy water, and put them back on. New arrivals in pristine pink and white, stepped in muddy holes a foot deep. I was under a water tent this time, where people were coming up wanting to be sprayed with water but there was none to spare in the water tub. Others were recycling their 10 bottles for a free water, & asking for 2 to clean and drink. Anyone who wore a bathing suit sported it! After a while, going up the hill was the biggest challenge of the day.
I didn’t get to see as many bands as I’d hoped. The Flaming Lips played a lot of great songs, including “She Don’t Use Jelly,” and “Yoshimi Battles the Pink Robot,” ending their set with “Do You Realize.” Which like SummerFest itself, “you had to be there.”


Aron catches the Flaming rabbit
Recently, someone posted a job opening on Facebook for the SummerFest 2010. My friend answered the ad with the hope of just seeing the Flaming Lips at no cost. He could even make a few bucks, so why not?!?! When he showed up the second day, he arrived an hour early. He told me that when he was reading, he “looked up and saw a bushy haired man in a suit walking along Allen Parkway. In a suit!” He said the man looked like his favorite lead singer so he started walking to see who it was. “Let’s just say I picked up the pace,” he laughs. “And sure enough, it was Wayne Coyne, lead singer of the Flaming Lips.” Aron said “Hi Wayne.” Wayne said “Hello.” “He’s real down to earth,” Aron said.
A: “Hey man, I don’t mean to bother you, but I jut want you to know, I’ve really enjoyed your music for many years.”
WC: “Thank you. Thanks a lot. Yeah, I like to be here early to be sure all the sound check and make sure everything is right for the show. Are you staying for the show?
A: “Yes. I’ll be here." Wayne asked Aron for directions to the stage. It turns out, Aron may have been the very first fan Wayne saw on performance day. The whole encounter was very special to Aron.