Experts say gentrification is a major contributor of floods in Houston. It's grown a lot since Ike in 2008 and Alison in 2001. Now it took NPR and other foreign press to shed light on Houston's real problem behind flooding. It's true, every time it rains, we panic because we flood. The city is flat. We can't help the natural landscape within this part of Texas.

The infrastructure... well, local resources are working diligently to bring that up to date, but whoever thought it was a good idea to allow so much of Houston to be bought up and built up without so much as a cut for flood prevention or funding to update an "obsolete draining grid" for this giant overpopulated city, ridiculous and astounding.

Here are the current numbers on Harvey: 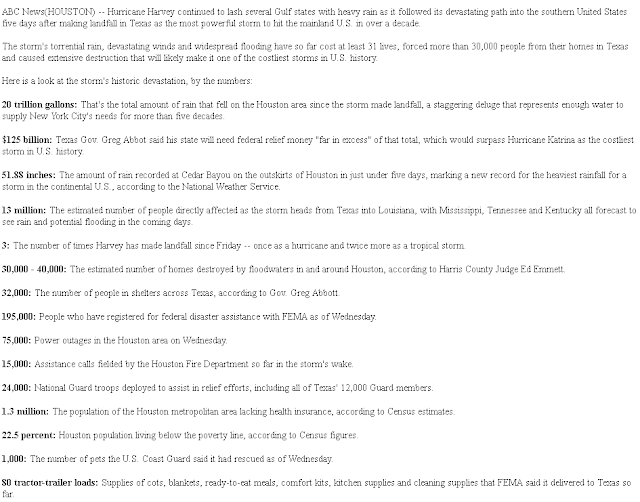 Of course were are all there for each other, to help recover, but what about pulling together for a cause geared toward flood prevention in our city? I know plenty of people I know hate that Houston's been a sell out. So why not make the buyers PAY for flood drainage system.

If we have to choose between zoning or floods where we have to deploy warships for humanitarian crisis across our entire region in order to save lives, which is it?

All I know is someone has a lot of "floodsplaining" to do.

After Harvey is all said and done, is it time to implement zoning laws for the city of Houston?
— HEIGHTSTONIAN ® (@HEIGHTSTONIAN) September 1, 2017