"Ezmerized" ... My night with Ezra Miller

Notsuoh downtown Houston was the scene. I grabbed a bench inside by the door and in moments, I saw Ezra Miller walking by. I tried to contain myself as he is truly stunning in person. Graceful gait, perfect posture. Tall, thin, in a black zip down jumpsuit. To my surprise, he and his band mates were carrying their own equipment inside. Now mind you, this is the guy who will play “The Flash” in 2018, about which he said I'd have to go through his publicist in order to get an interview. A DC Comics indeed.

Despite his star status, at 23, Miller is quite humble and sweet, thinks he can blend in, when he clearly stands out beautifully. I finally got the nerve to stand, stop him, and ask for that interview.

He stopped, looked at me, and I said “wow, it’s really you.” He said “hello,” politely smiles and before I could totally unravel, he paused, grabbed my shoulder and my hand, and said “I can’t engage in whatever this is right now, but thank you for coming to the show.” He was about to walk away when I asked him “can I show you something?” He said “yes.” Though a mature woman, I stood there with the pangs of a lovesick teenager, but if you know anything about him, you also know he's wise well beyond his years. I showed him my iPhone wallpaper that has had his face for more than 3 years. He pointed and said “that’s your phone with my face on it.”  Then said “wait, how long has that been there?” I said "a couple of years." He gave me a high-five and asked me my name. I told him and he gave me a huge hug and thanked me for coming to see the show. I sat back down, debating whether to ever bathe again! Decided, I will… one day.

He moved along and proceeded to carry his own equipment in and on-stage. Setting aside, I took in every sight of him. After the interviews and films, even his trip to the North Pole (which I forgot to mention worried me during his journey there), I felt I had a pretty good idea about who he is. Or so I thought…

Still waiting to see what I came here for, a couple other acts went on. Sons members engaged in the music, danced, and stood in the crowd among us all. Moving and bobbing to the beats of the other talent featured.

Then Sons of an Illustrious Father took the stage. I bought them a round of drinks. Ezra and I had a quick toast from the stage. I about exploded! Before they began, Ezra also stood and gently drew the band's three heads together, stroking the necks of his band mates, like a tight family of cats. Once the band began to play, I could see the music freeing the entire group, and the audience. 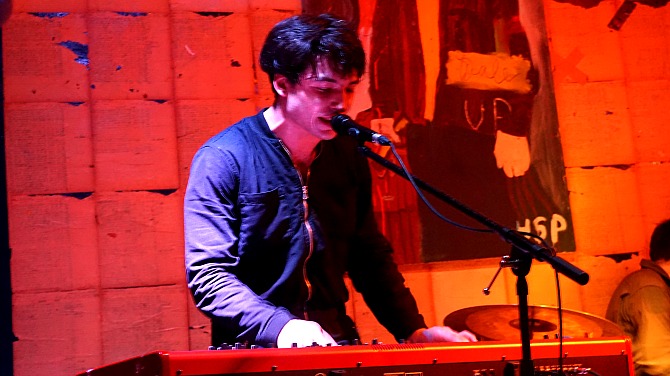 Lilah, the female of the group, petite and thin, cute, is a great guitar player and vocalist.  Josh, great too, is essential. Together, they were unifying and often vocally explosive, literally shaking at times. The overall intensity delivers and moves, so beautiful to see up close. I stood  “Ezmerized.”

To tell you the truth, I never really got into the band’s music until I saw them LIVE this night. Frankly I can’t name any of the songs, but the show was so emotionally seething, I cried. 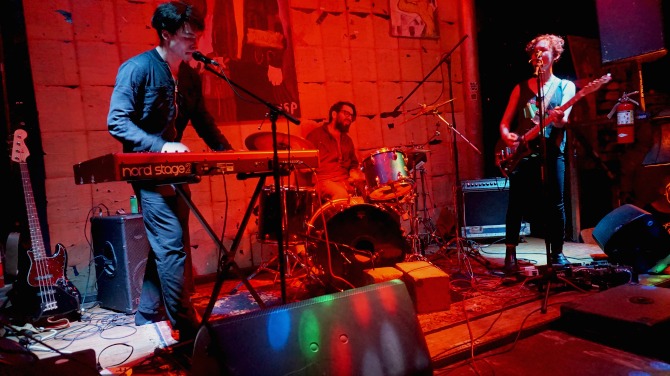 Mind you, I’ve been a fan of Ezra’s since “Beware the Gonzo,” when Miller played a student journalist… Something I live by. So needless to say, this experience was very special.

After the show, they moved off stage and I stuck around waiting for my photo with Ezra. I didn’t want to approach him, yet again, to say “HEY! REMEMBER MY PHOTO?!” So I sat awhile looking though my camera at footage and pictures of the performance I’d captured. Ezra walked by a couple of times, then out again. It was 2:30am and I thought, “time to go.” So I headed out and low and behold, Ezra was alone, curbside, conversing with a man who was seemingly homeless. I interrupted and asked Ezra “can I get a quick photo before I go?” He enthusiastically said “yes, YES!” He reached into his pocket and gave the man on the street $20 dollars to take our photo. I quickly handed the man my camera, ready to shoot, hoping he wouldn't run. The man smiled excitingly and asked us “where do you want it?”  Ezra said to him “let me see … you are now a contracted photographer. Hired to take our photos!”

Frankly, I have never and probably will never have a man so kind as Ezra, do something so sincere and truly romantic my entire life. I stood in awe, as the man of my dreams frantically looked for a place for us to pose for pictures. He turned one way, then another, toward a table, me steady behind him for where we would capture this truly surreal moment. “No.” Then he went by the steps that lead up from the outside of Notsuoh.

Also, to please me by trying to find a photo setting, I would have followed him INTO the street, had he led me. LOL.

He said “we need a setting to pose. How will we pose?” I was trying to find a place too and all that came out was “I can think of many poses for us.” No response… He just continued looking for a spot. Then he whipped close by me toward the street and I saw his chest hair peeping out. So of course I went for it… and ASKED! “Can I touch your chest hair in one photo?” To which he promptly responded, “no Rachel” wagging his finger at me behind him.  The whole search took about a minute and half. 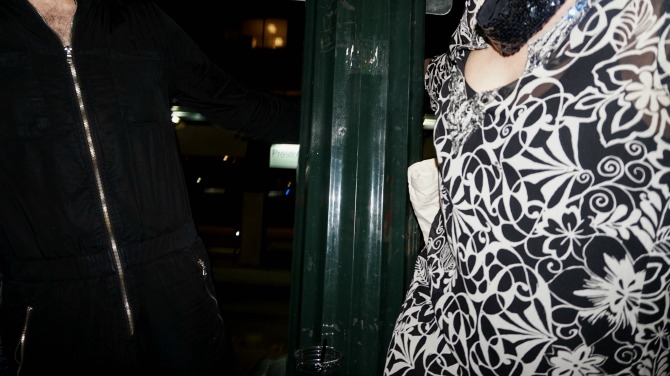 He then rounded a light pole, then jumped on and said “you have to climb up here.” I jumped on the base of the light pole too, “anything you say!” He said “we need theatrics.” I did everything he said! It was a fantastic super awesome dream come true, as we smiled and had fun on our photo shoot. 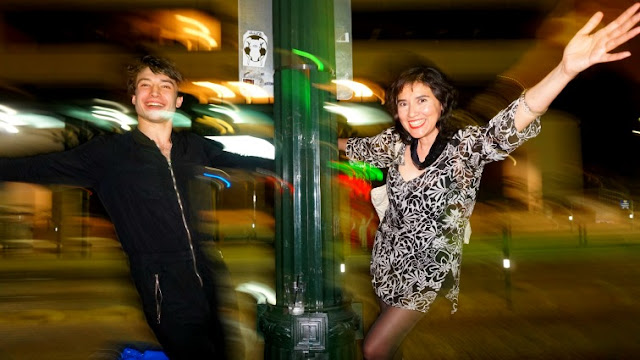 This was the best shot! 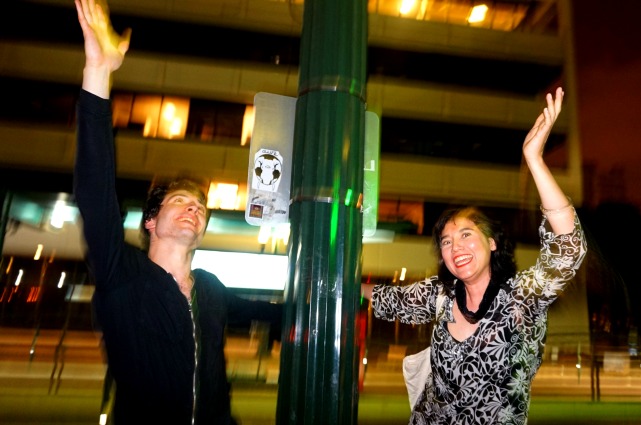 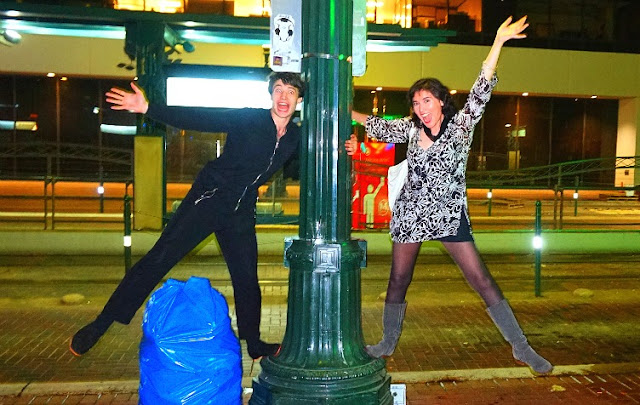 Then we just got crazy! So perfect!

He said “stretch out your arms.” I said “I’ll do anything you want Ezra.” I did. I suggested, “stretch out one leg.” We did and he said “Great idea! Rachel, I like your style.” I said “I love everything about you Ezra. You are my dream come true.” Then we wrapped up and hopped down to review the photos.

I was already the happiest girl in the world, until he headed for the door, leaving me outside!

I suddenly asked for a selfie. Still looking at the door, he said “you’re crossing boundaries again Rachel.” I asked “then can I tell you something?” He said “yes.” That’s when I told him all the nice things I thought about him… How long I’d been a fan, who and what he reminded me of, and as much more as I could gush in a matter of moments.

What I left out without knowing, is, how his inspiration helped me get through breast cancer last year, by simply entertaining me and making me happy when I was so sad and isolated for an entire year and a half.

It didn’t matter though. He walked toward me with a huge smile on his gorgeous face. As he came closer, I asked myself aloud “what else did I want to say?” He said “that’s a lot,” still smiling, adding “thank you.”

As he stood with me on Main St., I thanked him back and asked if I could give him something. He said “yes.” I took off my gorgeous black sequined headband from around my neck, which I never wear out, but did for this occasion, and handed it to him. He said “nooo, are you sure?! This is beautiful!” I said “yes, absolutely, it’s yours. I know you’ll know how to use it, enjoy it and appreciate it.” He asked if I meant to give that to him. I said “no.” I hadn’t. He said “I’ll wear it a lot.” Band mate Lilah had come out to join us at that moment and I introduced myself. She liked the headband I gave Ezra and agreed that it was nice of me, beautiful and that he’d put it to good use. He said “thank you so much” and put it on then and there. Once he had it on, he immediately started styling his shorter, thick and gorgeous hair in it. That made me very happy. It looks so good on him!

We all stood together and I began thinking I was already overstaying my exclusive welcome inside this inner circle dream state. So of course I asked for more photos, this time of the band altogether.

As Ezra went to get Josh, I got a chance to tell Lilah “you are the luckiest girl in the world,” to which she had no response.

They all got together under the Notsuoh sign, like I’d asked, and I shot 4 quick snaps of the trio. 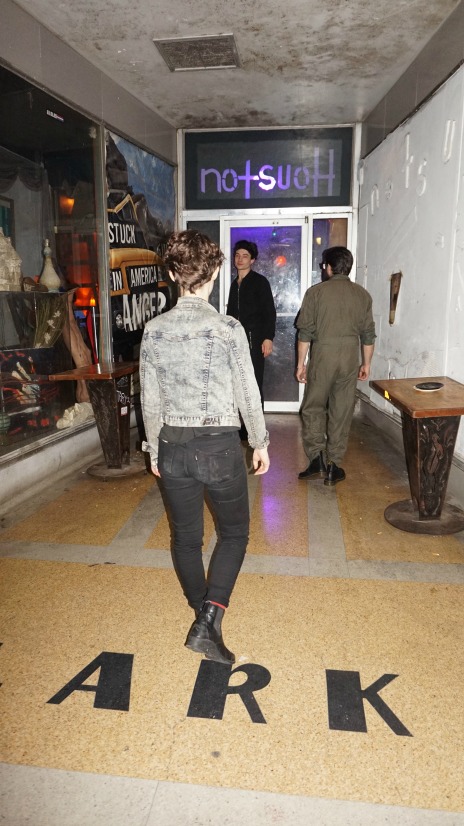 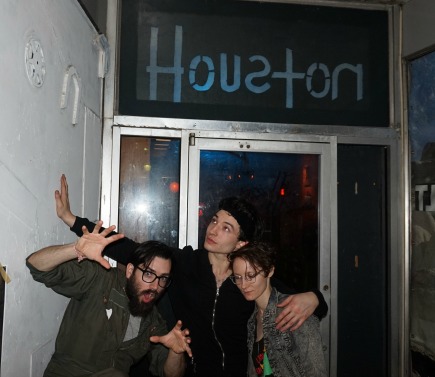 Yes, I flipped the one above... 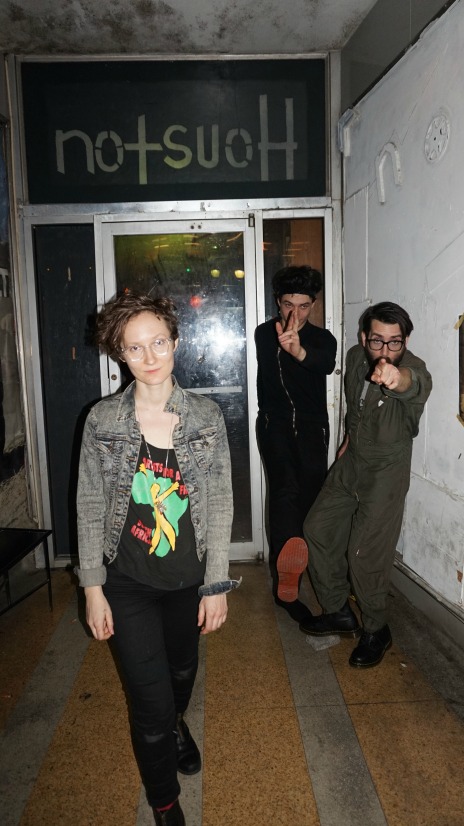 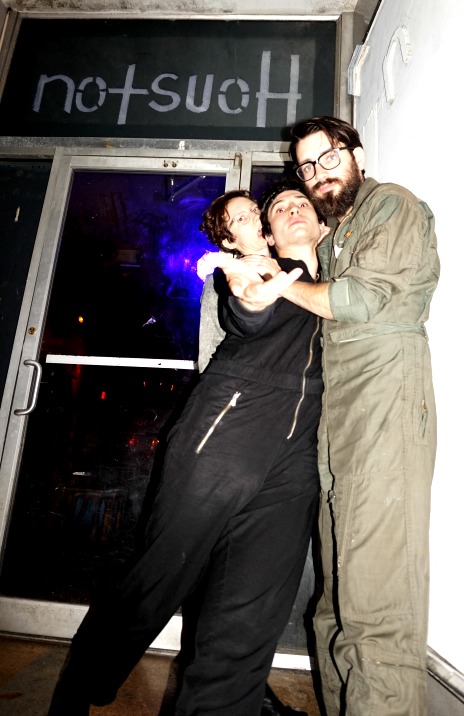 I said "let's do a creepy undershot!" This was their favorite one!

What I learned about Ezra Miller tonight, is, aside from him being the most gorgeous man on earth, (which I told him) he’s an incredibly kind person. Far more generous than anyone could imagine or expect. He knew I wanted a photo and delivered beyond anything I ever dreamed. He didn’t want to take a selfie though, just fun photos, which was even better. It’s more creative, which he clearly is, brilliant, and just EVERYTHING I adore!

Their next shows are at SXSW here in Texas this week. I’d love to go. Maybe this Saturday night…

I will tell you what though. After spending one night with the sincere and generous gentleman that is Ezra Miller, I’m done. My bar is so high, anyone else had better touch the sky.

I love you Ezra Miller!

Saturday night, Sons of an Illustrious Father played in Austin. Here are some photos I shot: 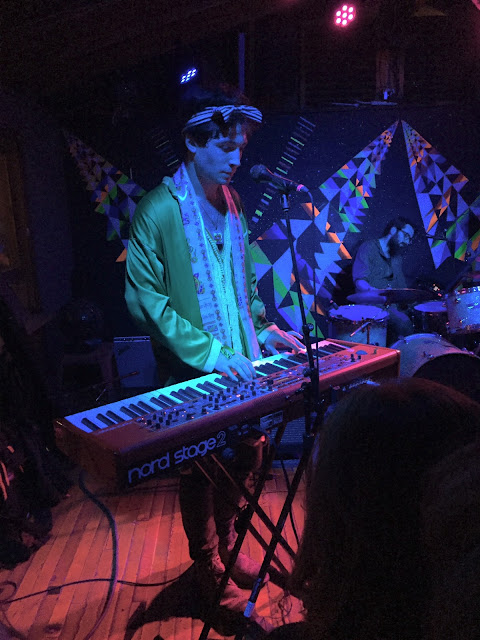 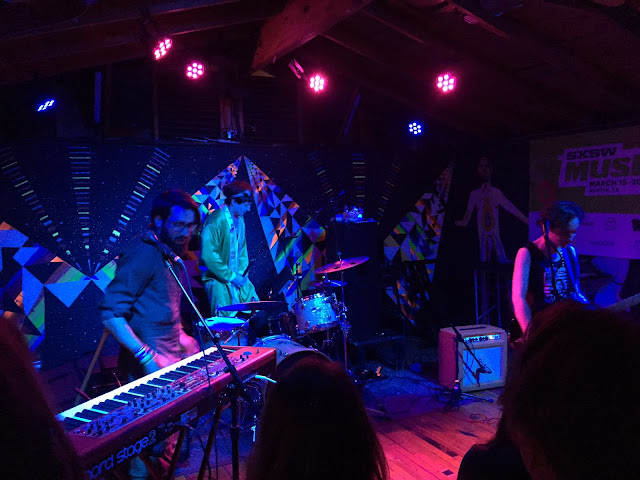 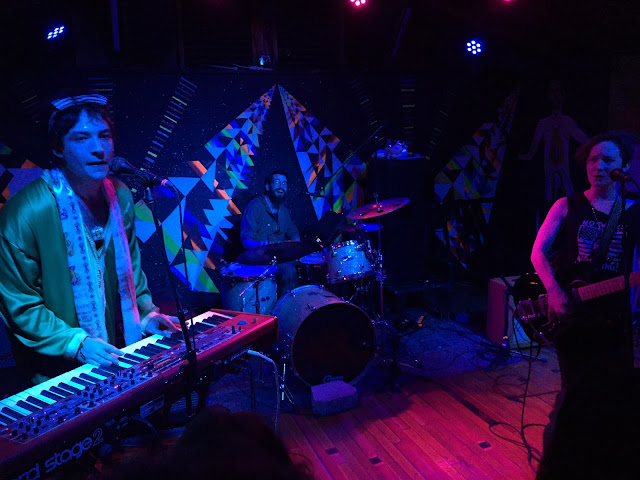